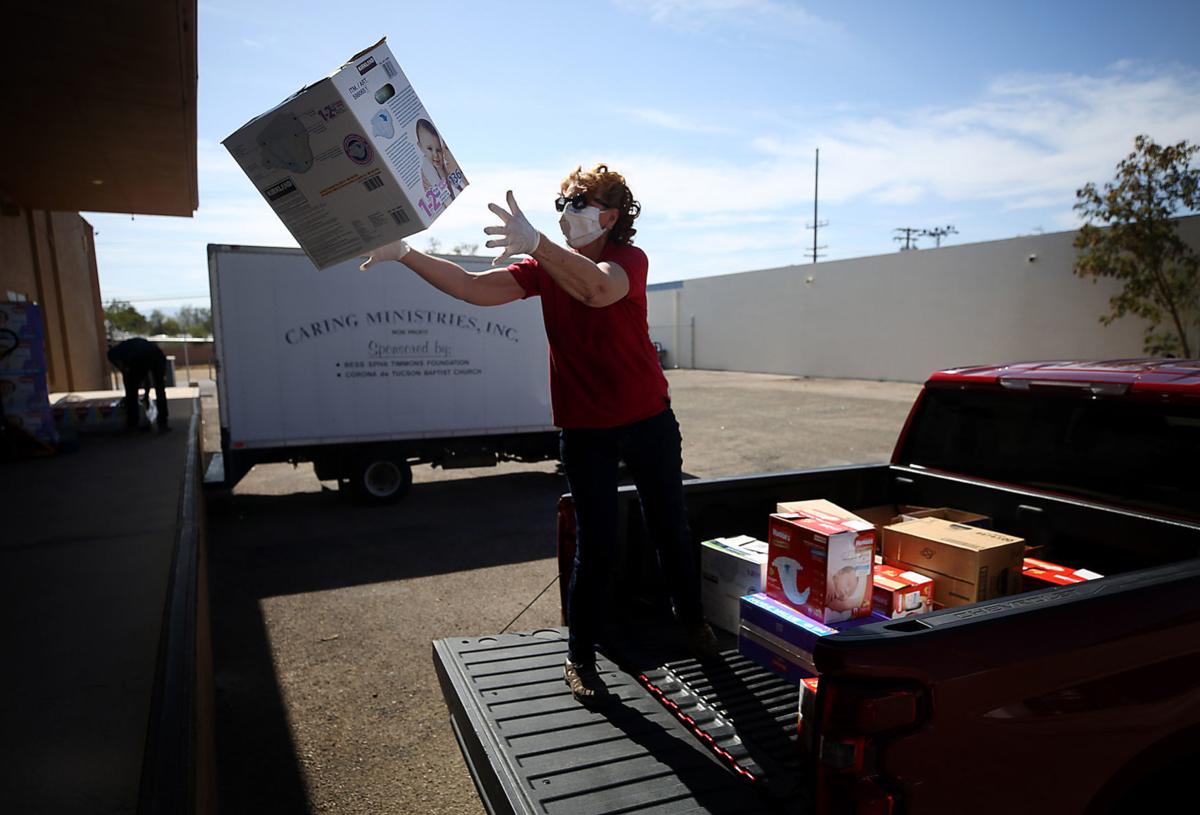 By Ann Brown Special to the Arizona Daily Star

The cost of canceling Dancing With Our Stars, the Diaper Bank of Southern Arizona’s gala fundraiser, due to the COVID-19 pandemic was more than missing local “stars” paired with professional dancers twist, turn, twirl and maybe take a tumble.

The cancellation of the April event was a $65,000 to $70,000 net loss for the Diaper Bank, says Shannon Roberts, chief executive officer.

Coupled with individual donations being down about 40%, revenue nosedived for the Diaper Bank as expenses and the need for the diapers, incontinence supplies and menstrual products it provides to Southern Arizona’s low-income individuals and families, increased by about 36%, Roberts says.

The Diaper Bank distributed about 42,000 diapers in addition to its usual 60,000 diapers per month during March-June.

The Diaper Bank, like many Arizona nonprofits, is in a fiscal quagmire of plunging revenue and surging needs.

According to a June 11 survey of 488 respondents from the Alliance of Arizona Nonprofits, fundraising and program cancellations due to COVID-19 have cost Arizona nonprofits nearly $53 million in lost revenue. A $25.3 million loss of revenue was reported by 128 Pima County respondents.

The pandemic and resulting economic downturn have taken a personnel toll, too. In Pima County, 689 nonprofit employees have been laid off or furloughed, according to the survey. Likewise, almost 5,000 volunteers have left nonprofits during the health crisis.

Mobile Meals of Southern Arizona, which relies on volunteers to deliver special diet, medically-tailored and regular diet meals to the homes of people who cannot shop for or prepare their own food, saw many of its volunteers resign altogether in the early part of the pandemic due to their age or their own health vulnerabilities, says Jennifer M. Tersigni, interim executive director.

Mobile Meals was able to recruit replacement volunteers – and even more, she says. But now that volunteers are back to work or have left for the summer, Mobile Meals needs additional volunteers. 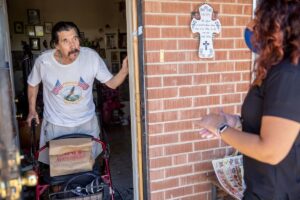 Roy Romo talks with Tucson Police Det. Mary Pekas after she dropped off a bag of food while volunteering with Mobile Meals of Southern Arizona. Police officers with TPD stepped up to volunteer while off-duty.

“Nonprofits are hurting,” says J. Clinton Mabie, president and CEO of the Community Foundation for Southern Arizona. Many nonprofits rely on “earned income” — the money generated from sales, services and donations — that came to an abrupt halt with the COVID-19 clampdown.

Simultaneously, stressful financial times and job losses have increased the demand for services from nonprofits, says Kristen Merrifield, CEO of the statewide Alliance of Arizona Nonprofits.

Added to the expenses side of the ledger: unexpected needs like hardware and software to provide services online and purchases such as personal protective equipment, better known as “PPE,” which is necessary to keep clients, volunteers and staff members safe, and to avoid contaminating products, like diapers, that the nonprofit may be providing.

“Our modified protocols and PPE utilization have and will continue to cost us about $6,000 per month,” Tersigni says, adding that the number of clients who need the Mobile Meals service — and who cannot afford to pay for meals, priced on a sliding scale, ranging from 50 cents to $5 per day for two meals — are up considerably.

The pandemic hit amid the bustling spring season, shuttering major events like the Tucson Festival of Books, which has donated more than $2 million to local literacy groups since its inception in 2009, as well as galas like Dancing with Our Stars. A Community Foundation survey conducted in May found that 24% of the 103 responding nonprofits had canceled fundraising events and 21% had postponed fundraisers.

Beyond the balance sheet, lack of person-to-person events inhibit organizations from developing relationships with potential donors and the community, says Steve Carr, owner of the Kur Carr Group, a communications and public relations agency. Guests at gala tables or those playing golf in a tournament learn about the purpose of the organizations and their host’s passion.

Some major donors have shifted priorities to frontline COVID-19 relief, which has left some nonprofit categories reeling, says Merrifield.

The arts are getting slammed, says Carr. The curtain has gone down on productions and performances and the related earned income, and some people are hesitant to plunk down money when they are unsure they will be able to have a seat in the audience. 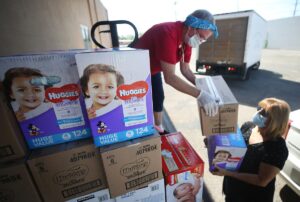 Elisabeth Monsma, left, volunteer coordinator at the Diaper Bank of Southern Arizona, helps with distribution. The virus forced the organization to cancel a major fundraising event.

MANY FORMS OF HELP

In Pima County, 59% of 128 respondents in the Alliance of Arizona Nonprofits poll, had requested about $16.5 million of PPP relief funding. Of those, 51% were approved to receive funds, 44% were awaiting approval, and 5% were denied funds at the time of the early June survey.

“Donors have been great” and responsive to increasing and changing needs, says Mabie.

CFSA and its business, foundation and individual partners, distributed nearly $1.5 million in COVID-19 relief funding, says Mabie. That translates to more than 60 nonprofits in Pima and Santa Cruz counties receiving money to enable them to serve their vulnerable clientele.

In addition, CFSA also distributed more than $100,000 to organizations forced to cancel fundraising events and programming as a result of COVID-19.

The Community Foundation is beginning a second phase that will include both funding and technical assistance to nonprofits to enable them to make program and process adjustments to deal with COVID-19, Mabie says.

For the arts, Gov. Doug Ducey announced July 2 that $2 million has been allocated to the Arizona Commission on the Arts for statewide grants to support arts education and creative efforts for nonprofit organizations with fewer than 50 employees, according to an Arizona Citizens for the Arts news release.

The Star and The Arts Foundation for Tucson and Southern Arizona launched a campaign to lighten the load for live theater workers who have lost income as a result of COVID-19. The campaign ends July 22 and had raised more than $15,600 as of July 10.

Mabie suggests helping the arts by renewing season tickets and, if the show doesn’t go on, donating the price paid for the unused tickets to the nonprofit.

“Overall, the pandemic is challenging organizations and individuals to regroup, rethink and respond to some new realities in fundraising,” says Jason Miko of Russell Public Communications.

The Tucson-based public relations firm manages the Jim Click Millions for Tucson Raffle. The contest gives Tucson nonprofits raffle tickets free of charge and allows to them keep 100% of what they sell. The grand prize is a 2020 Ford F-150 Platinum, donated by Click.

“We see charities motivated to sell tickets however they can to replace other fundraising strategies and programs that have regrettably been suspended,” says Miko. It is the 11th year for the raffle that churns out about $1 million each year.

Many are familiar with the Arizona Public Media membership/fundraising drives during which volunteers take pledges and chat about programming — usually in the middle of your favorite program.

Unable to bring volunteers into the studio this spring, AZPM prerecorded staff members discussing their roles and volunteers sharing personal stories about the impact of the stations and programming, says Deb Dale, chief development officer for Arizona Public Media.

The audience responded well, she says. “People liked knowing what employees do.”

A planned gift enables a donor to make a major gift to an organization after his or her death. Unlike an annual gift or a gift made for current use, a planned gift aims for the future.

There’s a “new sense of mortality,” says Mabie and people are thinking about their legacy and piqued an interest in planned giving.

Mobile Meals has been able to add services. Due to a few new grants, Mobile Meals is expanding services geographically, into the far west and northwest Tucson, into Green Valley/Sahuarita and the Vail-Corona de Tucson area, says Tersigni.

And until the end of November or until funds remain available, Mobile Meals has the ability to offer meal delivery service for free, she says. 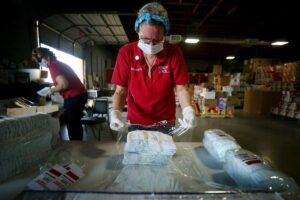 Monsma wraps infant diapers into bundles of 10 for easier distribution. The nonprofit has had to purchase personal protective equipment to keep clients, volunteers and staffers safe.

“I don’t know the future,” says Roberts of the Diaper Bank, which received a CFSA COVID-19 Response Grant and is participating in the Millions raffle. At this trajectory, the Diaper Bank is set through September.

The pandemic is a complex and expensive issue that is more severe than the 2008 economic downturn because every aspect of the community is affected, Mabie says.

“Everyone is doing everything they can,” he says. “The nonprofit sector is vital” and we all need to work together.

“As evidenced by the pandemic, the needs of nonprofits can change based on numerous external factors,” says Dale.

At the beginning of March when the novel coronavirus reared its head in Tucson, Helaine Levy, executive director of Diamond Family Philanthropies, says she reached out to nonprofit leaders to determine potential needs and teamed up with other organizations, including the Community Foundation for Southern Arizona, to leverage funds and impact.

Diamond Family Philanthropies is looking at mid- and long-term needs, the impact when government aid goes away, and ensuring long-term stability to meet emergency needs, says Levy, who has held numerous positions on nonprofit boards.

When the community emerges from the pandemic, Levy expects some services will be provided in different ways, some nonprofits may be realigned and that there may be some mergers or some nonprofits that no longer exist.

Levy’s group also loosened some of the funding-use restrictions on nonprofits, enabling flexibility to adapt to changing conditions and needs.

Dale supports the loosening of funding restrictions, saying she hopes the pandemic has helped “foundations and individuals better understand the importance of ‘unrestricted’ giving to nonprofits.”

“If you trust the nonprofit and their professional staff enough to fund them, then feel comfortable in the knowledge that they will know best how to allocate those funds,” she says.

“Arizona nonprofits are resilient, scrappy and passionate, and they will figure out new ways to raise funds,” says Merrifield.

Ann Brown is a former editor and reporter for the Star.